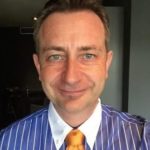 From the University of Wales College of Cardiff Business School he obtained a postgraduate Diploma in Business Administration with distinction.

His professional career started in commercial insurance where he would have various managerial positions for the next 23 years. Jan Vankrunkelsven was posted in Brussels, Amsterdam, Winterthur, Zurich, Paris and Hartford for various expatriate assignments.

His positions included Managing Director of Belgium and Luxemburg, Claims Manager in Brussels, Amsterdam and Paris, Business Architect in Hartford and most recently Global Head of Training and Head of Claims Operations for Europe, the Middle-East and Africa.

In addition Jan Vankrunkelsven is a certified counselor following the client-centered therapy from Carl Rogers. He also holds a Reiki master and teacher’s degree. Jan is fluent in Dutch, French, English, Spanish, German and Swiss-German and is also a member of Mensa Switzerland.Jan Vankrunkelsven holds Swiss as well as Belgian citizenship.

Norbuling Rigter College is affiliated to the Royal University of Bhutan.